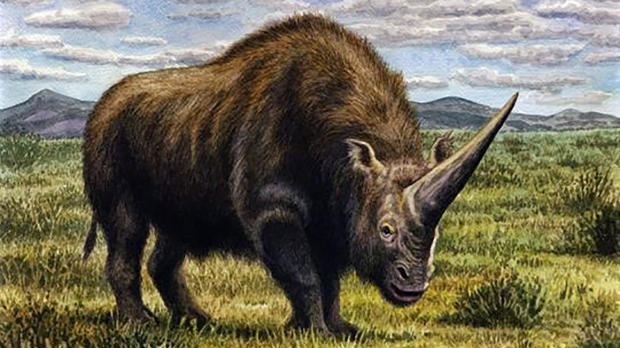 According to a new study, unicorns walked the Earth alongside humans – just not in the way you're imagining

Elasmotherium sibiricum, a giant rhino also called the "Siberian unicorn" for its large single horn, has long been thought to have become extinct between 100,000 and 200,000 years ago.

But new evidence found in genetic analysis and carbon dating by researchers with the Natural History Museum in London, England, shows that the species survived until at least 39,000 years ago.

With longer legs giving it a horse-like gait, and a horn that could grow up to a meter long, it's not a stretch to say that the ancient rhino has contributed to the unicorn myth – specifically now that its known that the rhino's final days would have been overlapped with the existence of modern humans

"We dated a few specimens – such as the beautiful full skull we have at the Museum – and to our surprise they came in at 40,000 years old," Study lead Prof. Adrian Lister said in a press release

The museum collaborated with researchers around the world to date 23 specimens using cutting-edge radiocarbon technology, finding that the species may have lived as recently as 35,000 years ago.

Scientists have thought that the giant rhino went extinct long before the last Ice Age – the megafauna extinction which was the end of other fantastic beasts including the wooly mammoth and sabre-toothed cat.

"'This megafaunal extinction event did not really get going until about 40,000 years ago,'" Lister said. "So Elasmotherium with its apparent extinction date of 100,000 years ago or more has not been considered as part of that same event."

Despite that, researchers say it's unlikely that the Ice Age, or even humans, were to blame for Elasmotherium's extinction, instead of pointing towards climate change, their food sources were destroyed.

The study examined the creature's teeth, finding that the levels of different carbon and nitrogen isotopes in the teeth confirm their diet was most likely grazing on tough dry, grasses.

As the climate shifted, and cooler summers hit Europe and Asia, grasses and herbs became sparser as lichens and mosses held hold.

Currently there are only five surviving species of rhino on Earth – a small part of the 250 species that have existed in the rhinocerotoidea family.

The Siberian Unicorn was one of the most influential of these, standing over 2 meters tall and weighing up to 3.5 tons.

DNA evidence found by Australian scientists found that the ancient beast split from modern rhinos on the evolutionary chain some 43 million years ago, making the Elasmotherium the last of an unique lineage of creatures.