Being Up With The Lark 'May Lower Your Breast Cancer Risk' 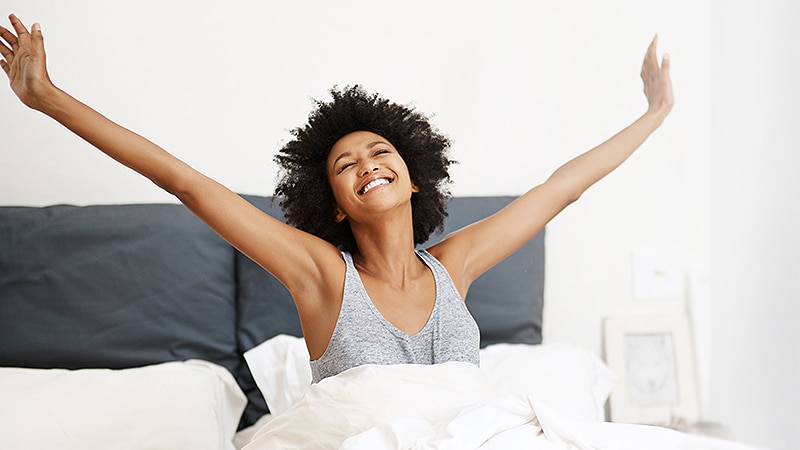 Women who have a preference for getting up early in the morning, or 'larks', may have a lower risk of developing breast cancer than those who prefer the evenings, the results of a large UK data analysis indicate.

Presenting their findings at the 2018 National Cancer Research Institute (NCRI) Cancer Conference, they showed that a woman's morning / evening sleep preference, or chronotype, affected her risk of developing breast cancer.

Specifically, morning people had an inverse association with the development of breast cancer, which researchers say in a news release approximated to a 40% -48% reduction in risk over evening types.

The full paper is published on a pre-print server.

Rebecca Richmond, a PhD, a research fellow at the UK Integrative Cancer Epidemiology Program and the MRC (Integrative Epidemiology Unit at the University of Bristol), admitted that the association may not, in the end, be causal in nature.

She said in the news release: "The estimates obtained based on questions that are before or after in the day.

"In other words, it may not be the case that changing your habits changes your risk of breast cancer; it may be more complex than that."

Richmond added: "However, the findings of a protective effect of our early study on consistency with previous research highlighting a role for night shift work and exposure to 'light-at-night' as risk factors for breast cancer . "

She believes that the findings therefore "have potential policies implications for influencing sleep habits of the general population in order to improve health and reduce the risk of breast cancer among women".

Dr Cliona Clare Kirwan, from the University of Manchester, is a member of the NCRI Breast Clinical Studies Group and was not involved in the study.

She described the findings as "interesting" and providing further evidence of the impact of the body clock and sleep preference on breast cancer risk.

"The use of Mendelian randomization in this study enables the researchers to examine the causal effect on different sleep patterns by looking at the variations in particular genes already known to be associated with sleep characteristics," Kirwan added.

"This helps to avoid misleading conclusions that could have been affected by confounding factors."

Emma Pennery, PhD, clinical director at Breast Cancer Care, nevertheless questioned how the findings could be applied to the real world.

She commented in a news release: While changing your sleep habits is not as easy done as other proven risk-reducing choices, as they are often part and parcel with jobs, parenting, or other health conditions. "

Pnee added: "Breast cancer is a highly complex disease and lifestyle changes do not guarantee prevention of breast cancer.

"The biggest risk factors – being a woman and get older – remain out of our control. So any lifestyle changes must go with all the signs and symptoms of breast cancer."

While previous observational studies have identified a link between sleep patterns and breast cancer, results in night shift workers have been inconsistent.

To investigate further, the researchers examined the relationship between sleep characteristics and breast cancer in 9599 breast cancer cases and 170,616 controls from the UK Biobank project.

For this, they conducted a single-sample MR analysis of the genetic variants linked to chronotype, insomnia, and sleep duration, adjusting for a range of potential confounders.

The researchers focused on 351 genetic variants that are associated with chronotype, 57 linked to insomnia and 91 with sleep duration.

They then performed a two-sample MR analysis on a genome-wide association study of 122,977 breast cancer cases and 105,974 controls conducted by the Breast Cancer Association Consortium (BCAC), again controlling for a range of factors.

Richmond explained: "The method of Mendelian randomisation in this research is particularly useful at identifying causal risk factors for the disease, since the genetic variants identified in relation to the sleep traits are not likely to be influenced by any external or environmental factors, nor by the development of cancer, and can therefore be used to determine cause and effect relationships. "

Multivariate Cox regression analysis revealed an inverse association between an early preference and breast cancer risk at 0.95 (p = 0.002), but the weaker evidence of an association with sleep duration and insomnia symptoms.

One-sample MR using the UK Biobank data reinforced the association between morning preference and a reduced breast cancer risk, at a hazard ratio of 0.85 per category increase (p = 0.098).

Again, the evidence of an association between breast cancer risk and either sleep duration or insomnia was weaker.

The two-sample MR analysis on the BCAC participants also supported an association between a morning preference and breast cancer risk, at an odds ratio of 0.88 per category increase.

There were also evidence of an association between sleep duration and breast cancer risk, at an odds ratio of 1.19 per hour increase over the recommended 7 to 8 hours per night.

Evidence for an association between breast cancer risk and insomnia symptoms was described by the researchers as "inconsistent".

Performing additional calculations for the news release, they determined that, in the BCAC data, being a morning person reduced the risk of developing breast cancer by 40% versus being an evening type.

The UK Biobank data indicated that having a preference for mornings reduced the breast cancer risk by 48% compared with being an evening person.

There was, however, less of an association between breast cancer risk and insomnia or sleep duration in this cohort.

Next, the researchers are planning to examine the mechanisms underlying the effects of different sleep characteristics on the breast cancer risk.

"We would like to use genetic data from large populations to further understanding how disrupting the body's natural body clock can contribute to breast cancer risk," Richmond explained.

Commenting on the findings in a release, Sowmiya Moorthie, PhD, a senior policy analyst (epidemiology) at the PHG Foundation, Cambridge, described the study as "robust", despite the lack of generalisability to women not of European ancestry due to the nature of the samples used.

She continued: "In terms of the implications of the research, it supports existing evidence that sleep patterns affect cancer risk, but it remains unclear how individual preferences for early or late rising interact with actual sleep behaviors.

"Whether attempts to modify sleep behaviors can help people manage their health and reduce their risk of cancer so needs further investigation."

Dr Dipender Gill, clinical research trainer, added that the study, albeit "informative", does not, by itself, "can not be changing their sleep patterns based on the evidence presented here ".

He added: "The statistical method used in this study, called Mendelian randomization, does not always allow causality to be inferred.

"In this instance, there may be a shared genetic cause for being a 'lark' and risk factors related to breast cancer."

In addition, Dr Gil pointed out that the pre-print version of the paper has not yet undergone peer-review.

Dr. Stephen Burgess, Sir Henry Welcome post-doctoral fellow, MRC Biostatistics Unit, University of Cambridge, also expressed some "reservations" about the results, especially as the figures "do not quite tally between the paper and the press release".

"This is unfortunate, as it means (for example) that confidence intervals for these values ​​are not available."

Dr Burgess added: "The key limitation is lack of mechanism.The authors do not show any biological mechanism by which the sleep timing preference could affect the breast cancer risk.

"Another limitation is that sleep timing preference (chronotype) is self-reported, and the investigation did not specifically recruit individuals with different sleep patterns, such as night-shift workers."