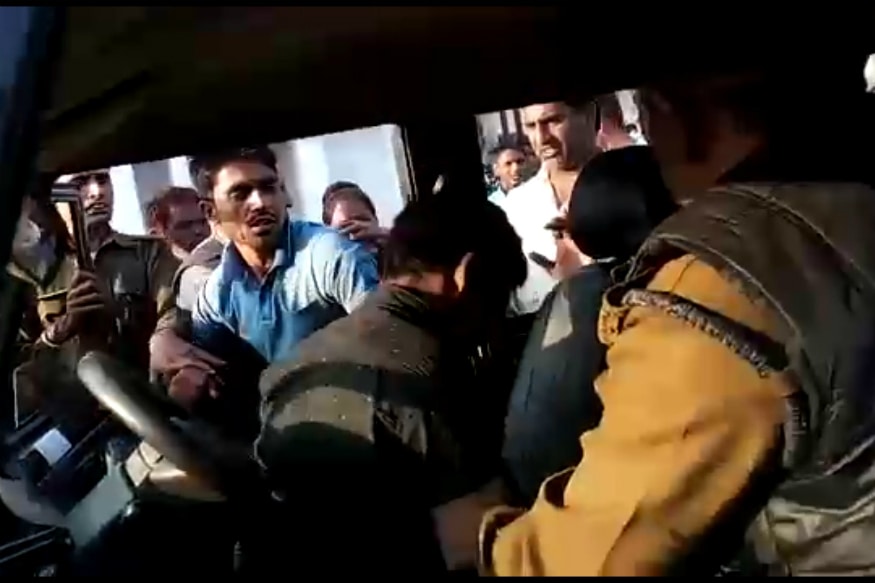 The opposition parties have said in Uttar Pradesh, BJP came in power after the situation in the state has worsened.

Lucknow: In a shocking incident which took place in broad daylight and in the presence of policemen, a man was thrashed and finally killed by a angry mob in Uttar Pradesh's Shamli district.

The horrific act, which was captured on camera, has exposed Chief Minister Yogi Adityanath's claims of an improved law and order situation in the state.

The video shows a youngster surrounded by cops being thrashed by miscreants in a police vehicle. He is then pulled out of the vehicle and beaten mercilessly again.
<! –

The incident was reported from Hathchoya village in Jhinjhana area where the victim, Tarashpal as identified, alcohol in influence under some local men with a brawl in. The men started beating Tarashpal up and the UP police was informed about it.
But despite the cops arriving on the scene and placing Tarashpal inside the police vehicle, the miscreants kept on thrashing him, who was allegedly led to his death. Tarashpal's family members later staged a protest and demanded that culprits be arrested.

The incident has raised concerns of the citizens in the state. "The law and order situation is grim in Uttar Pradesh, ever since the formation of Yogi Adityanath Government Things can be assessed by the fact that the chief minister of the state himself is a accused in a murder case. The BJP government had sought six months' time to improve the situation. It has now been more than 19 months and the things have only deteriorated. Our advice to CM Yogi is, resign immediately and return to your math (temple), "said UP Congress Spokesperson Anshu Awasthi.

Terming UP's law and order 'jungle raj', Samajwadi Party Spokesperson Anurag Bhadaurai said, "It has become a jungle raj in the state after the BJP came in power. Jail inmates are being served liquor and bullets and people are being lynched in front of the police The SP of the concerned area should be suspended for such serious laxity. "

Ajay Kumar, SP, Shamli, told News18 that all the policemen present at the site of incident have been suspended. "We have come to know about the video in which a person is being beaten in presence of the police. All the police seen in the video for their laxity. A departmental inquiry also conducted," Kumar added, adding: "There were reports that the person had died in front of the police, but that is not true."