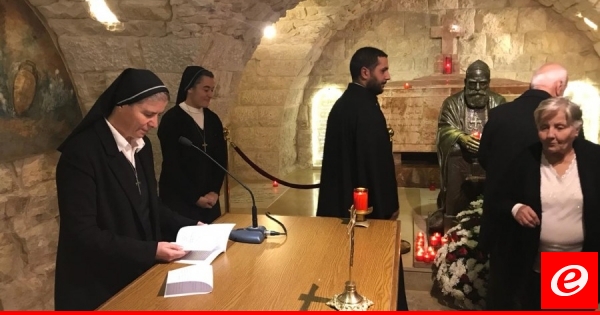 The organization of the sisters of the holy family, Maronets, celebrated Eid al-Ischikalal during a group in the monastery of the society, where the tomb of its founding father-in-law Elias Al-Hawy was founded by Father Raymond Basil in the presence of sisters, Mary, Antointe, Saddah, and other minor nuns. Was there. And believe in.

Father Baisil preached after the Holy Gospel, "On the occasion of Independence Day, thanked the audience for this national stand and faith on the tomb of the Prime Minister Al-Hivek." He mentions church history, "liberation from sacrifice". He emphasized that "Christians should be incense and salt in this world," the head of the head, which we were flying around today in the memory of freedom, this is the creator of freedom, and who founded it, he is the only teacher, the words of Jesus from the Arbian mountain You are the salt of the earth, you are the light of the world. God and neighbor, everyone loved without discrimination or discrimination, sympathy, salvation is common, everyone is convinced that we live or die together. "

After the Mass, the attendees went with a march of candles in the palace of Prime Minister Eliass Hoque. In conclusion, documentary information about patriarchal life has been shown.