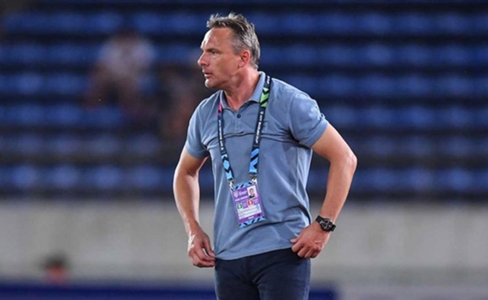 Myanmar boss Antoine Hey has also downplayed the extra rest of Malaysian ahead of his Saturday AFF Championship group encounter.

Ahead of their final Group A match against Malaysia, away at the Bukit Jalil National Stadium, Myanmar head coach Antoine Hey said that a packed venue will not negatively affect his charges.

As it stands, Myanmar is leading the group with seven points, with Vietnam in second also on seven points but separated by goal difference, and Malaysia third on six.

For the White Angels, a win over on Saturday will send them through to semi-finals as group winners, while a draw would be enough for them to book their spot. For the home side, nothing less than a win will qualify

In the pre-match press conference on Friday, Hey is confident of his squad's chances, given that every single one of his player will be available for the crunch tie.

"We have a full squad, there are no injuries or suspensions. The players are highly motivated and ready, and we can not wait for tomorrow's match.

"In our last game, against Vietnam, we rested a number of players; I picked five players at the beginning, against Laos and Cambodia.

"I did that knowing that our last group match here would be the most important one, and I wanted all of the players ready," explained the German.

He also downplayed the advantages of the home team; A week of rest and playing at their homeground.

The Harimau Malaya did not play on the matchday four of the competition last Tuesday, whereas as of Thursday evening, 40,396 tickets to the clash had been purchased, with many more of home fans expected to kick-off the run-up in their tickets.

"I do not think that getting a week's rest is a huge advantage," Hey declared. "It means there is one week to think about the match, which has a negative effect on a player. Whereas we have stayed in action, keeping it the momentum, so it can go either way, we'll see tomorrow.

"We're looking forward to the fantastic atmosphere, one that will entertain everybody. The bigger the crowd, the better it is. But ultimately it's 11 versus 11 while the supporters can not go on the pitch. It's a good occasion for us to qualify (to the semis) from, we're not afraid or scared, "he explained.

Keep updated on the 2018 AFF Championship!