Morecambe flexes its mussels: New Eden Project to be shaped like huge shells 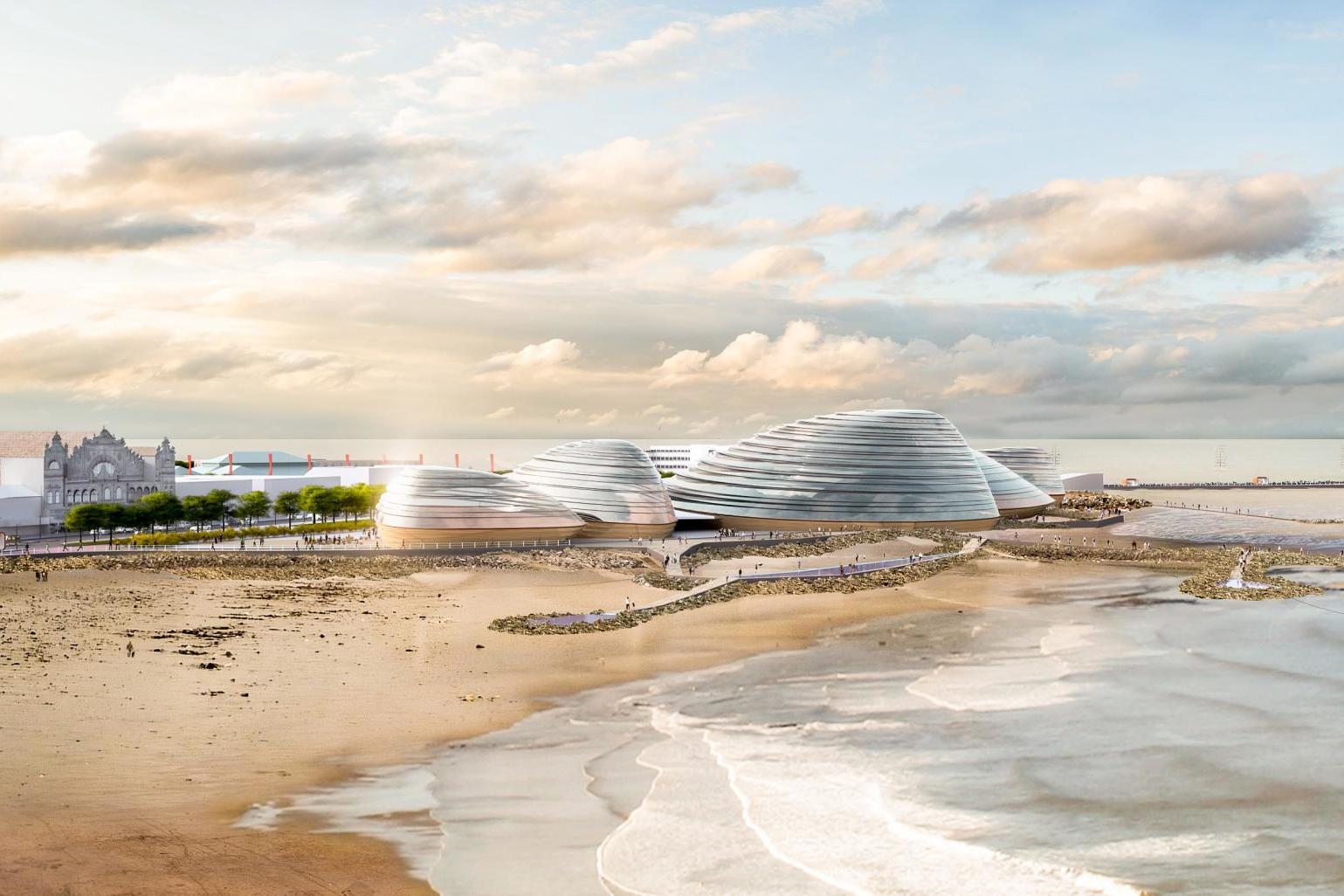 It has been named Morecambe's million-dollar question

Ever since the Eden Project announced plans to open a version of its Cornwall attraction – famed for its huge biodomes – in the lancashire seaside resort, a subject has spoken in the conversation: the city is exactly what our Eden looks like?

Now an answer has been offered: it will look like a huge mussel colony.

Inside the vast glass buildings will be performance spaces, immersive experiences, observatories and pleasure gardens, all inspired by marine life.

David Harland, Chief Executive of Eden Project International, told The Independent: "The biodomes in Cornwall are the size and shape they are used because we are enclosing a rainforest, but we also want to be in the newspapers around the world and get people saying, 'I just go and see that building'. That was the aim and we achieved it And now we are the same thing in Morecambe

"So, we have talked about things like 'What did you find on the beach there?' You find mussel colonies and, funnily enough, when you want a structure that has the ability to house gardens and attractions and to give people a unique experience, well the shape of the mussel shells will be perfect. "

Attractions within, he said, will introduce visitors to Earth's various water worlds in the same way Eden Cornwall – which boats a 16,000 sq meters rainforest – introduced people to the planet's plants and trees.

"There, the focus is on plant and humans and their interdependence," he said. "So, here, we'll be doing something similar but in a marine context.

"The first priority is getting people to connect with the bay outside the front door but that will allow us to tell the story of what goes on in the other places around the world and give them portals through to those places."

He said the emphasis would be on a possible attraction where people could walk through a single magnified drop of water to experience how much the invisible life teems within: "We do not want to be passive or a standard museum – we are the business of giving people experiences they will not get another place. "

The autumn announcement that an Eden would be built in Morecambe – if funds could be raised – brought much excitement to the town with MP David Morris hailing it a "game-changer".

It followed a year of behind-the-scenes work after Lancaster University first approached the attraction company and sold it on the idea of ​​opening its second UK venue in the resort. They said Morecambe – a once thriving seaside destination was now widely perceived to have fallen on hard times – was in need of the same regeneration which the Eden Project Cornwall had brought from that region to the beginning in a disused clay pit in 2001. They pointed out town's bay – famed for the speed with which the tide comes in – was an area of ​​special interest in enviro-tourism.

"We get a lot of approaches from different places across the world," said Mr Harland, who says the company is investigating other possible places in China, South America and New Zealand. "But this one talks to us and to what we are about."

It will be located on the city's old Stone Jetty, and will be roughly the same size as the Cornwall Eden Project – "But this is a town center development so we have the same outside space," said Mr. Harland .

It is hoped the venue will attract between 500,000 and a million people every year – although the concern, to some extent, would be really keeping demand down.

"We know if we do something fantastic, we will not have too many problems getting the numbers – close to the Lake District, as well as Manchester, Liverpool and various other attractions, "said Mr Harland. "What we feel is going to be a way of ticketing the attraction – in a similar way to Harry Potter World – to manage demand."

If the funding could be secured – which would come from a mixture of government and private cash – it is hoped building work could start by 2019 with a potential 2022 opening date. The sticking point, often, on such huge projects, however, can be local opinion.

“You know how news works,” he said. “We announce we’re doing this thing, then the local TV goes out and finds two people in favour and one against, and in Morecambe, they were struggling with that. Across the board we’re getting support because…I think people can see the potential it has for the town.”

Issues such as pressure on local transport links and infrastructure would be smoothed out as part of the development, he said. “Those are the things that people worry about – and rightly, because let’s not kid ourselves, people will be impacted. What we say is the impact will be offset by the social and economic benefits which this will bring.”

Certainly, the benefits have been felt in Cornwall. It has attracted 19 million visitors and pumped an estimated £2bn into the local economy since opening 17 years ago.

“We would love to do that for Lancashire,” said Mr Harland. “The history of Morecambe is that this was a place where, traditionally, people went to escape, take the air and seek a version of the exotic. That’s all we’ll be doing now: trying to bring back the exotic.”